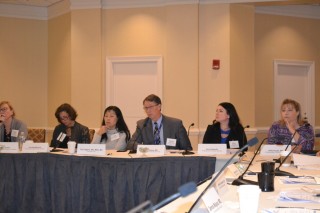 On November 16, maternal and perinatal health leaders and experts from across the state gathered in Harrisburg for the first advisory meeting for Pennsylvania's newly formed Perinatal Quality Collaborative (PQC). Over 60 stakeholders joined the meeting both in-person and virtually.

The Pittsburgh Regional Health Initiative (PRHI) is establishing the PQC, which aims to make Pennsylvania the best place for a mother to have a baby by measuring quality, spreading best practices, and advancing policy. The Pennsylvania PQC will build a statewide, multi-stakeholder coalition and use research, training, quality improvement, technical assistance, and policy/advocacy to lower maternal mortality rates in Pennsylvania and achieve excellent attachment and outcomes for mothers and babies. The Henry L. Hillman Foundation provided a $120,000 grant to PRHI to help establish the Pennsylvania PQC.

The rate of maternal mortality in the U.S is three times greater than in any other developed country, and it is trending in the wrong direction while other nations lower their rates. Pennsylvania ranks 17th in terms of the lowest maternal mortality rate, according to the United Health Foundation's 2018 America's Health Rankings, and was previously one of only a handful of states that did not have a PQC. States with an engaged, active PQC, such as California, have achieved significant reductions in maternal mortality.

Initially, the PQC will focus on lowering maternal mortality and improving care for pregnant women with opioid use disorders (OUD) and babies with neonatal abstinence syndrome (NAS). It will build on complementary efforts in the Commonwealth, such as the newly established Maternal Mortality Review Committee (MMRC), the Premie Network, the Northeastern PA PQC, and the Multi-Disciplinary Workgroup on Infants with Substance Exposure (MDWISE).

The maternal mortality rate in Pennsylvania has doubled since 1994, mirroring the national trend. Rates of OUD and NAS are also rising rapidly. According to recent analyses from states such as Massachusetts, the proportion of pregnancy-associated deaths related to substance use disorders climbed from less than 10% in 2005 to more than 40% in 2014.

After welcoming comments from Sally Kozak, MS, deputy secretary of the PA Department of Human Services' Office of Medical Assistance Programs, and an overview of the PQC's vision and goals by JHF and PRHI Director of Government Grants and Policy Robert Ferguson, MPH, the Advisory heard from a number of existing PQCs and PQC networks.

Zsakeba Henderson, MD, FACOG, provided an overview of the Centers for Disease Control and Prevention's National Network of PQCs (NNPQC). The NNPQC provides guidance to states with newly formed PQCs by connecting them with existing statewide PQCs. Amy (Bross) Ushry, RN, MPH, from the American College of Obstetricians and Gynecologists' Alliance for Innovation on Maternal Health (AIM), offered recommendations for getting started with the PQC, including ensuring that patients are among the key stakeholders invited to meetings. Susan Ford, MSN, RN, from the Ohio Perinatal Quality Committee (OPQC), spoke on Ohio's experience starting a PQC, including the process for developing their key goals, drivers, and interventions for achieving the PQC's goals.

Following the November Advisory meeting, smaller work groups will convene to discuss issues related to data and policy. The goal is to stand up the Pennsylvania PQC in 2019 and recruit high-volume delivery sites to the PQC during the first quarter of the year.